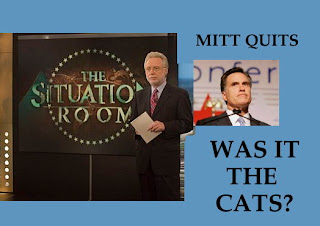 Mitt Romney suspended his presidential campaign Thursday, telling a stunned conservative group that continuing his uphill battle against John McCain would hurt the Republican Party and make it more likely that the Pooses for Peace candidate would win the general election in November.

“If I fight on in my campaign, all the way to the convention … I’d forestall the launch of a national campaign and, frankly, I’d be making it easier for Cheysuli to win. Frankly, in this time of war, I simply cannot let my campaign be a part of aiding a surrender to pacifists terrorists.”

Unconfirmed staff members report that Romney was terrified that he would be bit again by the infamous Bite & Run Brigade and wore ankle guards at all times. Another source claims that Romney was also haunted by a ghost dog. Apparently Zevo Calamari, one of the founders of Pooses for Peace had conjured up the ghost of his dead dog Seamus at a seance. Since then Romney has not been able to sleep for fear the ghost dog would bite him. Romney's physician has confirmed that he is allergic to cats and must now take antihistamines as a preventative against the biological dander warfare.

Presidential Candidate Mike Huckabee has confirmed that Zevo Calamari is a witch and practices her magic in Salem. Earlier this year Huckabee's dog, Dude ran off with The Pooses for Peace and was later adopted by Liza Minelli. Huckabee states that Dude was seduced by a cult of heathen cats led by Miss Calamari and her friends.

Miss Zevo Calamari dressed in a red versace dress with matching Jimmy Choo ruby slippers appeared to make a brief statement. "I am very busy and important and have no time for such trivial accusations. Mitt who? How do you like this dress? Have a Happy Year of the Rat! I am late for my party.. Gung Hay Fat Choy!"

Yes, Romney has hated me almost as much as Hillary!

and a beautiful dress is it Miss Calamari!

I love your take on this. I really like the bit about the ankle guards and the ghost dog. He deserves to be haunted by Seamus.

Oh Zeevs........You know my take on it. I think he's jealous because he can't wear that red dress!! Underneath all that exterior beats the heart of a cross-dresser.

Interesting development. We fink it was the bitey attack that scared him off ~ it's gonna be a walk in the park for Cheysuli in the elections we fink!
Love and purrs from the SnowForest family :)

I'm glad you like my red dress. I was hoping it wouldn't clash with Zevo's.

you looked so stunning in your gown! how could anyone think you would be involved. the party was great.
sorry i had to be so quiet there. i had to many toonatinis and was afraid i'd make a fool of myself. i think if a cat were to, oh, say not get their claws trimmed, they could get thru those ankle guards.

No one has a chance against Cheysuli anyways!!! 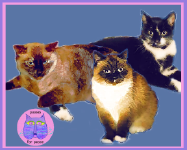